Please fill in your details to download the Table of Contents of this report for free. We also do customization of these reports so you can write to us at mi@fibre2fashion.com in case you need any other additional information.

Based on detailed financial analysis, the WTI Sales index was calculated to be 108.5 in 9M FY18 as compared to 107.9 in 9M FY17. This indicates that the overall consolidated sales increased by 1 per cent during April-December this year.

However, EBITDA declined drastically by 24 per cent. Consolidated WTI EBITDA stood at 79 in 9M FY18 as compared to 103.3 in 9M FY17. Due to introduction of the goods and services tax (GST), there was an impact on demand in Q2 which further impacted the profitability of major textile players in 9M FY18. Also, there has been increase in employee cost and raw material cost during this period thereby adversely affecting EBITDA margins.

The average IIP (index of industrial production) for textiles has declined by 1 per cent and that for apparel by 10 per cent in 9M FY18 compared to 9M FY17. Decreased IIP may be attributed to lower market demand immediately after GST introduction, especially for apparel which saw significant decline in production. However, IIP has shown an upward trend in later part of Q3, suggesting revival.

Due to the increase in raw material prices, the average WPI for textiles has shown an increase of 2 per cent in 9M FY18 compared to 9M FY17.

Indian exports of textiles and apparel products stood at $27 billion in 9M FY18, increasing by 3 per cent as compared to same duration last year. 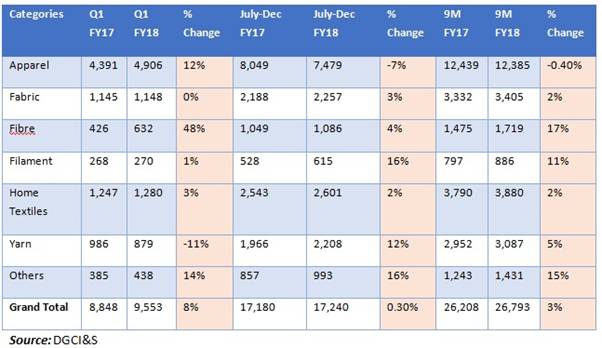 Exports of all the categories have grown in 9M FY18 as compared to 9M FY17, except apparel. India's apparel exports increased by 12 per cent year-on-year (y-o-y) in Q1 FY18. However, the same declined by 7 per cent in Q2 and Q3, resulting in overall stagnation. Fibre exports grew significantly at 17 per cent in 9M FY18 driven by cotton fibre exports' growth of 24 per cent. Fibre exports slowed in Q3 after a robust Q1, while yarn exports have shown a reverse trend. India's overall exports grew 10 per cent y-o-y during 9M FY18 compared to 3 per cent for the T&A sector.

The US and UAE continue to be the two largest export markets with a cumulative share of ~30 per cent. India's imports of T&A products are on a rise after introduction of GST, especially for fabric and apparel. Imported textiles and apparel products were worth $5.3 billion in 9M FY18, registering a growth of 12 per cent as compared to 9M FY17. 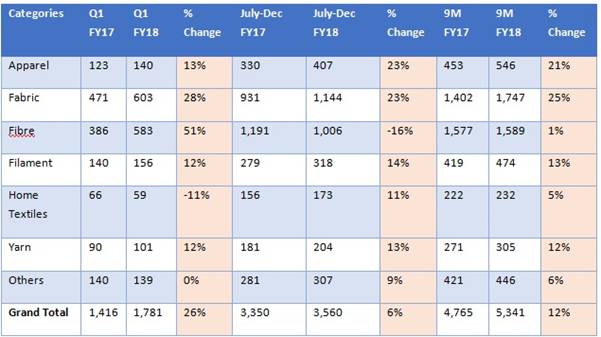 Vietnam has shown high growth of 8.8 per cent in imports of EU. Other top countries showing high import growth to EU include Pakistan (11.9 per cent), Cambodia (14.6 per cent), Morocco (8.8 per cent) and Bangladesh (5.9 per cent). China has grown 4.1 per cent, while India has shown a lower growth of 3.6 per cent. India's lower growth compared to competing nations shows further increasing competition in export market for India.

Overall, there has been an increase in raw material prices in 9M FY18 compared to 9M FY17. On an average basis, raw cotton, viscose staple fibre and polyester staple fibre prices increased by 4 per cent, 10 per cent and 11 per cent respectively in 9M FY18.

Similarly, there has been an increase in cotton yarn and polyester viscose blended yarn average prices growing at a rate of 5 per cent and 6 per cent respectively in 9M FY18. However, polyester cotton blended yarn has registered a decline of 6 per cent in 9M FY18 compared to 9M FY17 on an average. However, the same grew by 0.2 per cent during Q3 FY18.

Overall, the Indian textiles and apparel industry has struggled during nine months of FY 18 in terms of profitability. However, sales performance has grown marginally with higher increase in Q3. The overall performance has rebounded in Q3, which remains promising for the future.

Exports have grown at a slow rate with a stagnant growth in apparel exports primarily as a result of increasing competition from other countries. Also, India's apparel and fabric imports are on a rising trend especially since introduction of GST. This signifies a threat to domestic manufacturers and needs to be addressed with appropriate interventions.